Ulvis Alberts by special invitation of Jack Binion was asked to photograph the World Series Of Poker in 1977. It was a small gathering of mostly Texans, that included Johnny Moss, “Texas Dolly” Brunson, “Amarillo” Slim Preston, Jack “Treetop” Straus, “Sailor” Roberts, Stu Ungar and others. Ulvis jumped at the opportunity to “hang out” with a crowd of poker players, the likes of, he had never seen before! For Ulvis’ camera it was a feast of photography. He shot mostly black&white film and some color. The B&W photographs came out as his first book “Poker Face” in 1983. The color version was forgotten in his archives. In 2012, he rediscovered this priceless color treasure! This is the story of the most famous poker photographer in history!

In the 1970’s, there was only one tournament game the professional gamblers waited for all year and that was the  World Series of Poker at Binion’s Horseshoe casino in downtown Las Vegas.

Downtown had no glitz or glamour like the Las Vegas strip. And hardcore poker players, for the most part, knew each other by name and reputation. It was a meeting of friends and mostly it wasn’t about the money but rather bragging rights. There were no players wearing sunglasses to hide their poker face. There were no sweaty faces, or twitchy nerve endings in the poker room. Just cigar and cigarette smokers sipping bottled water. The event was World Series of Poker an idea developed by Benny Binion in 1970 to attract his poker friends, mostly road gamblers from the hidden backrooms of bars in Texas. His motto: “Give them good food and an honest gamble and they’ll come.” 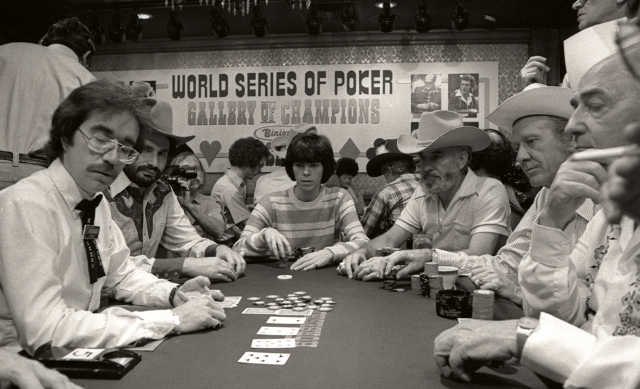 All you need is Chip and Chair!

The players that participated in the big one, the Texas Hold-em buy-in at $,10,000 were less than 75 players. But I had access with my noisy 35mm, Nikon film camera to the poker players. I photographed gamblers with names like: “Amarillo Slim” Preston, “Puggy” Pierson, Jack “Treetop” Straus, “Sailor” Roberts, Doyle Brunson and Stu “The Kid” Ungar who won three WSOP championships before overdosing on drugs. Legendary Jack “Treetop” Straus that in 1982 worked his last 500 dollar poker chip up to win the half-million dollar championship. Hence, the legendary saying: “All you need is a chip and a chair!” to win a poker tournament.

In 2002, I returned to the WSOP, still at Binion’s but the scene was not the same. The characters I met at Binion’s Horseshoe casino were dead. The only remaining legend was Doyle “The godfather” Brunson. Today, he’s 84 years old and can be seen on High Stakes Poker in live cash games at the Bellagio.

“In the old days when you sat down at a tournament poker table you knew six or seven of the eight players. Today, you’re lucky if you know one of eight. It’s a new game.” Chris ” Jesus” Ferguson.

In 2004, the WSOP brand was sold to Harrah’s Entertainment and is held at the Rio Casino. It attracts more than 7,000 entrants in the final Hold-em event. Some of the players wear sunglasses at these events but I’m not sure if it’s because they are hiding a “poker face,” shielding their eyes from TV lights or just want to look cool. Lady Gaga had a hit song called Poker Face a few years ago. It wasn’t about poker but other choices. Both of my photography books, the first in 1981 and Poker Face 2 in 2006 used these familiar words.

Was I searching for a poker face when I was photographing?

Would I recognize a poker face through my camera lens before I took a picture? Probably not on both counts. You as the viewer of my poker photographs have to decide on a “poker face” in my images. Does the secret of a poker face remain a secret? Probably, yes.

“I consider POKER FACE 2 to be one of the definitive works in poker history. Part news, part high art, and part pure entertainment – POKER FACE 2 provides a rare portrait into the grit and grime of the game of poker that is glossed over by television and unseen by the public. The chiseled faces, the disheveled looks of desperation, the ecstasy of victory and agony of defeat — it’s all in there. No other photographer other than Ulvis Alberts could have captured poker in its rawest, purest, and most astonishingly captivating form.”