The Mythology of Real Roulette Gamblers!

In gambling games we encounter a lot of nonsense, superstition and mistakes in general. The real twisted gamblers truly believe everything from controlling the ball with magnets, secret buttons placed under the roulette table to invisible laser control by the camera system.

During my work I have heard a lot of insane theories, which deserve to be summed up in a unique article about gambling. A gambler will probably never stop believing that it is not possible to win long-term at roulette table. It definitely cannot be beaten by made up roulette systems you can find on the Internet. 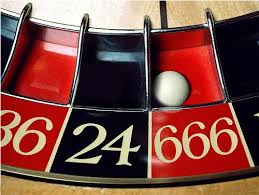 Roulette is a form of entertainment for the rich, or for those, who truly want to enjoy themselves and try their luck. These roulette “virgins” mostly succeed. They need to just place a single chip directly on a number and magically this number will come up! We´re talking about French roulette with a probability of 1/37! And this is only beginning of how this devil’s wheel will drag you into its “fiery” claws. It is not a coincidence that the sum of all the numbers on roulette wheel equals the devilish 666!

But let’s get back to our roulette myths. The most common mistake is probably the one about the ball. The gambler believes that the ball magically remembers all previous numbers that came up on the roulette in chronological order. The ball also knows, what number will come up next, because it is “programmed” (by the casino or the gambling God).

This little ball does not need any programming, just like a casino will never become a charity! This is so-called Gambler´s fallacy – basic mistake of all disappointed player’s! The numerical results of previous spins do not affect new spins in any way and therefore the probability of each new spin is always exactly the same!

Everything can be easily proven by using basic mathematics and probability. No scam is needed here and especially with the zero number, which takes all outside bets and ensures the long-term profitability of the casino. Sometimes the casino wins only 50% of the bet and leaves 50% to the player. A bet of 100€ on red, green 0 come up, you lose 50€. It is up to casinos, because every casino can set up the rules themselves! Electronic roulette will take your whole bet

We can show the probability on a simple example. We have 10 identical wallets on the table, but only one of them has €5 in it. What is our chance of picking exactly the wallet, which has the money?

Yes, this is 1 out of 10 cases, which is 1/10, or 10%. As you can see, you only need to use common sense and realize that each new spin on the roulette has the same probability. However once I had an escapade when the number 12 came up 6 times in a row. Luckily no player was playing at the table at the time. Later, when a regular roulette gambler and a big fan of ZERO SPIEL entered the casino, he blankly stared at the screen with the numbers and said:

And you are all ours, that’s how we used to say it in the casino. Roulette virgin comes to play a live roulette and has the feeling that he is beating the devil’s wheel with his endless luck and a system he thinks he has. He is invincible, because he is winning and his body is flooded with endorphins.  He gets used to this great feeling quite easily.

…and he is caught, caaaaaught … He is ours, lalala!

That’s the first and last time he is successfully able to go to the cashier, where he redeems his chips worth €300 he had won only from a single twenty. However the vision of easily earned money will bring him back to the table sooner or later. But if lady luck isn’t standing by his side, he starts telling himself he is doing something wrong, some mistake that causes losses. He starts repeatedly returning to the casino and search for that delightful feeling of winning. To tempt your own luck is great fun, but game should be always taken with the righ attitude.

The casino does not need any tricks or magic buttons to stop the ball on the weakest number! You will never be a favorite in the casino! On average 1 in 37 spins the money goes to the house, which is 2.65% of average earnings of the casino.

The superstition of players often leads to the belief that if black came up 3 times in a row, red must come up unconditionally. Roulette, nor the ball, do not have a memory or consciousness, and they don’t have to do anything. The probability is always the same, i.e. 18 ways in 37 possibilities (in French roulette 36 numbers + 0). The main thing you have to understand is that if you are betting on red or black numbers, in both cases you are betting on 18 numbers and there are 19 against you. The fact that the green zero doesn’t come up that often is another myth. Zero is exceptional only with its green color, which does not add, or take away anything from its probability.

Advice of the dealer: Don’t push your luck at every cost and don’t lose your child’s lunch money!