In May 1979 a colourful Irish bookmaker found himself with three days to kill in Las Vegas. He wandered into Binion’s Horseshoe Casino and found himself in the middle of the biggest poker game on the planet. His eyes lit up with excitement and his gamblers instinct kicked in. He befriended the biggest, baddest and best poker players of them all. He didn’t know it then but he would be instrumental in spreading the gospel of hold’em to Ireland, Europe and beyond. In the beginning Terry Rogers, never a man to hide his light under a bushel, once declared:

“I have been the greatest single factor in the worldwide spread of competitive poker.”

Liam Flood, the renowned tournament director and poker player was a long-time friend and colleague of Terry’s. Like many great stories it starts with a meeting of like minds.

“Terry and I were on-track bookmakers: we were competitors. We started to hold poker tournaments for charity. This was in the mid-1970’s. We’d get anywhere between 100 and 300 players playing 5-card draw for £100 to £200 per game. That was a lot of people for that kind of money at the time.”

Every year Terry would go to America on business. In May 1979 he had a few days off and went to Vegas. He saw this high stakes poker game going on and met Benny Binion and the rest is history.

Guys like Benny Binion, Doyle Brunson and Chip Reese really held Terry in high esteem. He’d give them great odds, better than any American bookie would give, but he still made sure he had a 20% edge, said World Series bracelet winner and former Irish Olympic swimmer Donnacha O’Dea. 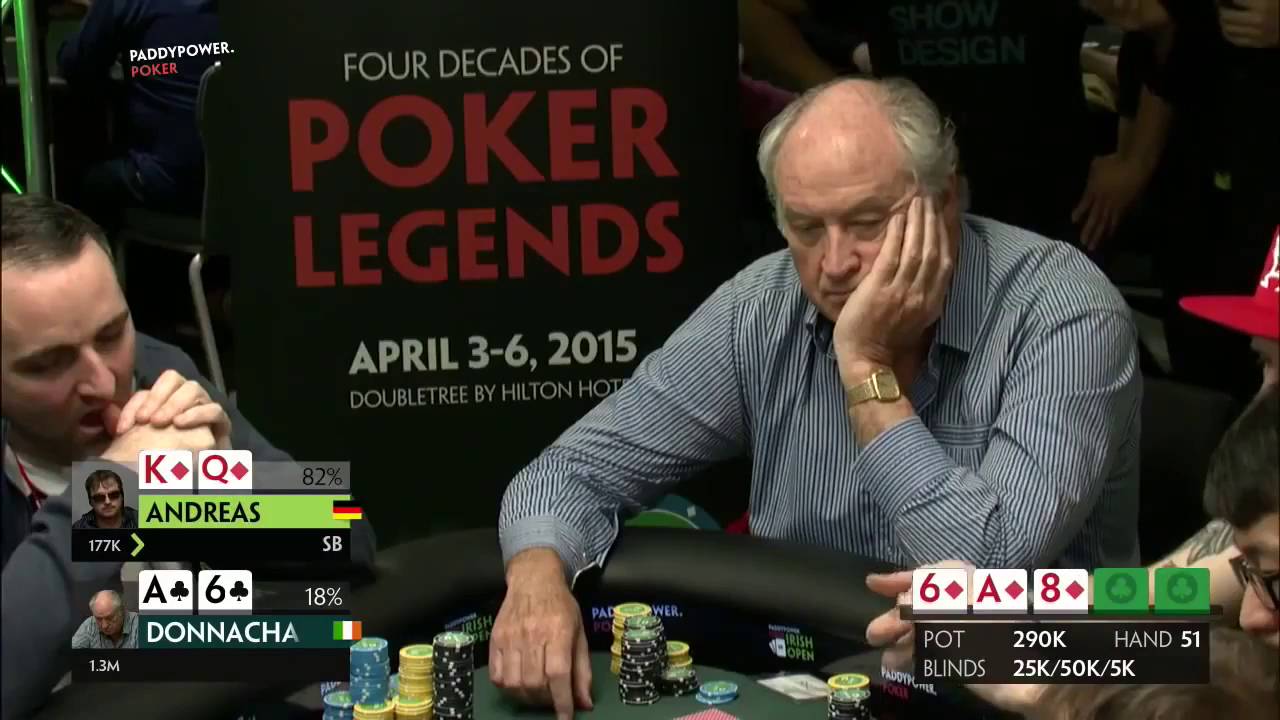 After the 1979 World Series Terry returned to Ireland enthusing about what he’d seen. Stud and draw were the poker variants of choice in Ireland but the new variation he’d seen in Vegas, no-limit hold’em, beat them all for excitement and skill. In the following years he returned to Vegas for the World Series with Flood but his bookmaking activities brought the attention of the Las Vegas Police. Terry and Liam ended up being arrested and imprisoned. The irony of being jailed for gambling in Vegas was not lost on them.

The Irish Poker Open is the longest running No Limit Texas Hold ’em poker tournament in Europe and second longest in the world after the World Series of Poker. The tournaments Terry had been running in Dublin since the mid-1970’s morphed into the Irish Open in 1981. The Irish Open, was organised under the auspices of the charity fundraising organisation started by Terry called the Eccentric Club. Terry’s annual trips to Vegas and the success of the first Irish Open led to the US players he had befriended repaying their debt of gratitude for his generous bookmaking services by making a rare excursion from their home soil to play in Ireland in 1982 and 1983. Donnacha and Liam remember the American invasions with glee.

“One year Terry got them a yellow Rolls Royce for when they arrived at the airport. Another year he arrived with a white horse which Amarillo Slim, who was a real horseman, rode out of the airport. Those years he had Tom McEvoy, Jack Keller, Stu Ungar, Doyle Brunson, Chip Reese, and Perry Green from Alaska. It was funny to see them try to pay for goods in Killiney village with chips from Terry’s poker tournament, something they were used to doing in Vegas.”

He didn’t like spectators hanging around the tournament distracting the players so to earn the privilege he’d charge them the same as the entry fee the players paid to play in the game. Terry viewed poker as a serious business. He once said:

“Poker isn’t decadent you know. These men are working for a living.”

Terry took his poker tournaments really seriously and ran them very well. He was quite paranoid about cheating and always insisted the dealers cut the deck in a special way. He’d declare a hand illegal if he saw someone cut the deck in any other way. The annual event, now in its 25th year, had a remarkable genesis. The story is peppered with colourful characters and laced with triumph and tragedy. Terry’s death in 1999 robbed the world of a visionary poker fanatic whose influence on the modern game, particularly in Europe, can still be felt far and wide.

In 2005 paddypowerpoker.com undertook a five year sponsorship of the event, securing its future and ensuring it would continue in a spirit Terry would have appreciated – well organised yet inviting; always focused on the player.

Terry was a great man, poker is a great game, Dublin is a great city and this is going to be the greatest tournament ever seen in Europe – just the way Terry would have liked it.